Skip to main content
Home » What's New » When Should My Child Have Her First Eye Exam? 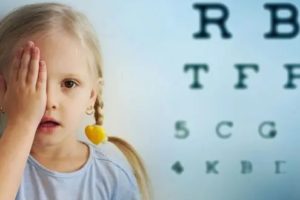 Young children can have problems with their eyes, just like adults. In fact, young children can have eye issues before they leave the womb. However, there is a difference between an adult with eye problems and a young child. Young children with eye problems that arent treated can cause significant visual problems down the line. Furthermore, young children have to deal with learning new concepts that adults don’t. So having good eyesight is essential to your child’s success academically. In the end, the school system is probably not the best place to check vision in children. An optometrist should be consulted for a child’s potential vision issues. They are trained and know how to assess the beginning of treatable vision issues like lazy eye or crossed eyes. Both of those conditions, if treated early, can be eliminated or minimized early on. Young children in school often learn through visual media. Everything from picture books, computer screens, chalkboards viewed from far away, and even phone screens can pose a problem for a child with vision problems. However, the child may not have the know-how or maturity to know that their vision is impaired. That is why an adult needs to get the child examined early instead of waiting for the child to mention issues. Also, the visual history of the child’s family should be taken into account. If you, as the parents, have vision issues, it is a good chance that your child might also have problems.

When to Get That First Exam

It is recommended that a child’s eyes should be examined by an optometrist as early as six months after birth. The exam at six months won’t be the same as an adult. Babies aren’t able to say what they see on an eye chart yet. However, there can still be issues that an optometrist can find out without having to engage with the child verbally. The optometrist will focus mainly on if the child’s eyes are healthy and free of defects. Some defects can impair vision so severely, if not treated, that vision can be affected for the duration of the child’s life.

Getting your child’s eye examined early is essential to the health and learning capabilities of the child. If you have any concerns about your child’s eyesight, consult with your optician right away.